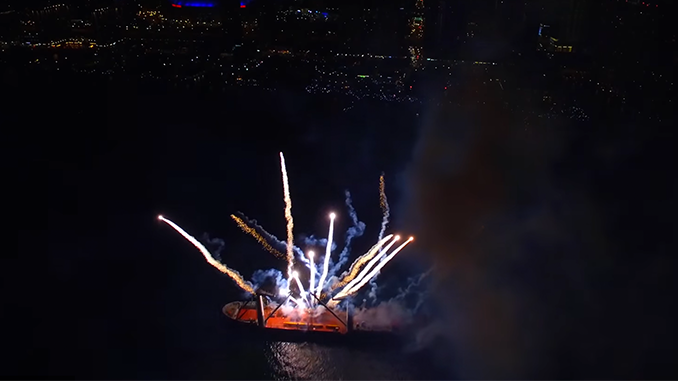 DroneBoy, a company specializing in aerial cinematography and photography have has been putting drones “in harm’s way” to get the shot since 2013. Recently, Droneboy was approached by Telus, a Canadian national telecommunications company, to live stream one of Canada’s largest fireworks displays and they jumped at the chance to take on this new challenge.

The fireworks show took place over the waterfront of downtown Toronto and included live feeds from multiple drones, footage from both wireless and wired ground-based cameras, as well as audio sources. DroneBoy turned to Wirecast to help simplify the streaming of these sources to Telus’ Facebook page.

Aside from the fact that they were terrified that one or more that one of their drones would literally be shot out of the sky by the very thing they were trying to capture, DroneBoy had the challenge of setting up a live stream on the water, beneath the pyrotechnics of a fireworks display — certainly not the most hospitable of conditions.

DroneBoy set up their floating streaming center on a tugboat stationed in the harbor overlooking the area in which the fireworks would take place. They used a combination of hard-wired receivers for the drone cameras, GoPros and Rode mics on boom poles as their live sources. All of this was captured by a Blackmagic Ultrastudio Mini Recorder and streamed through Wirecast to Telus’ Facebook page to tens of thousands of fans who could not attend the event in person.

Amongst the mess of cables and connections on a boat, in the dark, with fireworks launching and drones taking off and landing all around, DroneBoy, with the help of Wirecast was able to successfully broadcast this explosive event to the world.

Check out their behind-the-scenes video to see the fireworks from a “drone’s eye view.”